Are you looking for a tasty, sugar-free drink? 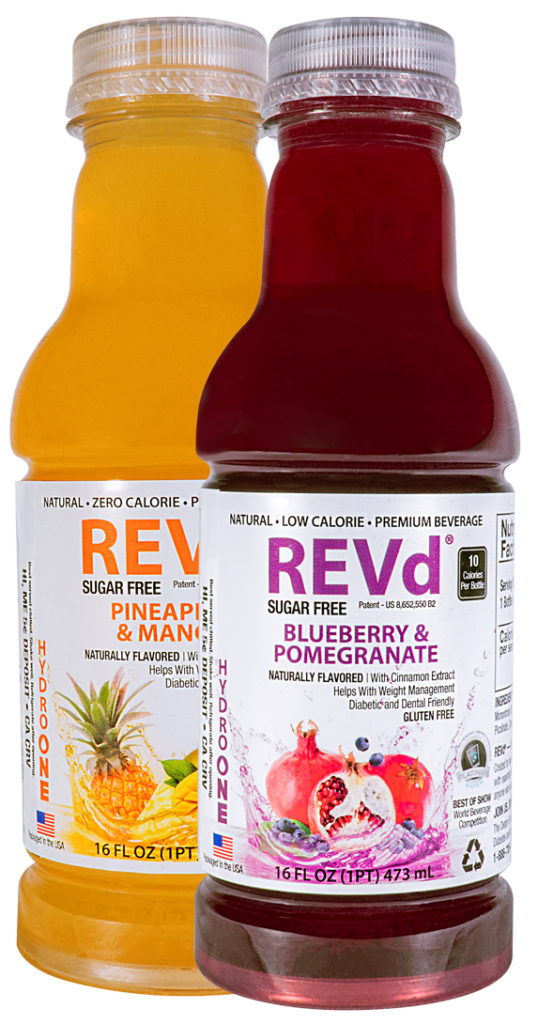 Our REVd Blueberry & Pomegranate and Pineapple & Mango are all-natural sugar-free drinks.  Good for everyone, they are especially formulated for diabetics and people interested in lowering their consumption of sugar.  In a market dominated by sugary beverages, REVd delivers a flavorful, thirst-quenching drink that supports diabetic health.
*Also try our TRUE Sugar Free Green Tea.

According to the Centers for Disease Control (CDC), in 2012, 29.1 million adults and children, roughly 9.3 % of the United States population have diabetes.  Of those, approximately 8.1 million are undiagnosed and do not realize that they have the disease.  Another 86 million people are pre-diabetic.  Only 5% of diabetics have Type 1, meaning that 95% of the cases are Type 2, and preventable.

Diabetes is a disease resulting from the body’s inability to produce or use insulin due to high glucose levels, often caused by unhealthy diets.  Our REVd drinks are patented and contain Cinnulin PF, a functional extract of cinnamon.


Cinnamon Extract (Cinnulin PF)
The all-natural REVd drink has a proprietary ingredient – functional cinnamon extract or Cinnulin PF. Cinnamon extract has been shown in studies to help with the dietary management of diabetes, linking it with lower blood sugar levels. As a diabetic (particularly if you are a Type 2 diabetic), regulating blood sugar is the main consideration for your diet. Let REVd play a part.

At Hydro One, we truly understand that there is a critical need to link solid science to action. Therefore, we have coupled the increasing consumer demand for healthful beverages with scientific discoveries of specific ingredients that can produce specific results which led to the development of functional beverages. These products move beyond conventional, fortified, or enriched items, or products marketed as healthy because they are low in sugar. Our products address specific major health issues such as diabetes, arthritis, aging, kidney disease and heart health through scientifically proven ingredients rather than chemically-derived pills. Of the consumers who purchase functional beverages, nearly a third do so to address a specific health issue (Mintel, 2006).

Jim McCrossin on the Benefits of REVd

Posted by Hydro One Premium Beverages on Wednesday, October 30, 2019